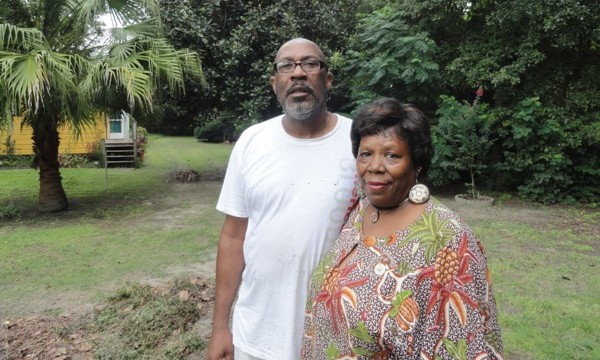 In Alabama, Community Founded by Former Slaves Now Under Siege By Tar Sands

Author: mathsavage
Category: Environmental Justice
Tags: Africatown, Alabama, Mobile, Tar Sands
← BP Cleanup Worker: “How Could I Have Known It Would Get This Bad?”
Three Years After BP, Gulf Fishermen Struggle to Survive →

Some people might stand in the shadow of Mobile, Alabama’s Cochran-Africatown Bridge and see nothing but the sprawling tank farms, barges and coal terminals that clutter the Mobile River’s banks, stretching northward from south of downtown to historic Africatown and beyond.

Others might see Plains Marketing’s looming terminal and wonder if its giant storage tanks hold some of the millions of gallons of toxic tar sand oil (also known as bitumen, dilbit or heavy crude) that arrive in Mobile each day on Canadian National trains.

But Lorna Woods, a 5th generation direct descendant of Africatown’s original residents sees the place where her great-great granddaddy Cha-lee and his brother Cudjoe first set foot on North American soil after a long, harrowing journey from Africa. She knows that Africatown’s roots grew out of these formerly lush marshes along the mighty and once-pristine Mobile River.