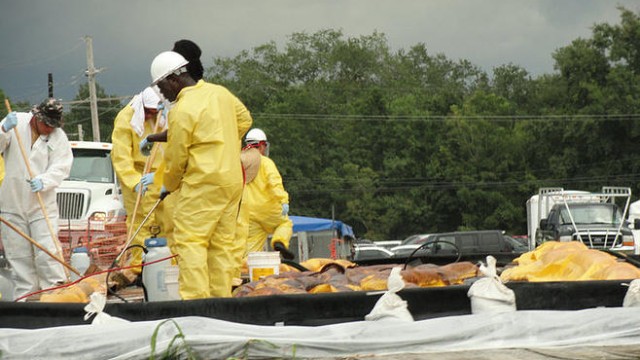 Since working cleanup after BP’s Deepwater Horizon oil disaster, crabber Ralph Foster, of Bayou La Batre, Alabama has had pneumonia, bronchitis and joint pain.  His wife was diagnosed with a rare and extremely aggressive form of breast cancer.  In Biloxi, Mississippi, shrimper Tuat Nguyen and her husband are plagued by headaches and breathing difficulties.  Doctors have prescribed countless medications, but nothing helps.

In communities across the Gulf Coast, community leaders like Paul Nelson, a third-generation oyster fisherman from Coden, Alabama, point to a marked increase in funerals since the start of the disaster, particularly for relatively young, previously healthy individuals. Nelson, who is sick himself, can quickly list Chris LaForce, Tony Bosarge, Clarence Springle, Doyal Davis and other neighbors who worked cleanup, but have since died of aggressive cancers or cardiovascular conditions.

But while sick fishermen, cleanup workers and Gulf Coast residents have struggled to have their illnesses diagnosed and treated, BP has repeatedly denied responsibility in both a court of law and the court of public opinion, often citing what they call an “independent” study by ChemRisk (now Cardno ChemRisk) to back up that claim.

But as it turns out, the study’s authors may have violated ethical guidelines when submitting the work for publication.

The study, Analysis and Modeling of Airborne BTEX Concentrations from the Deepwater Horizon Oil Spill, was published in July of 2011 in the scientific journal Environmental Science & Technology, an American Chemical Society (ACS) publication.

In the study, ChemRisk researchers analyzed data provided by BP and concluded that offshore workers were not exposed to harmful levels, or doses, of certain types of airborne chemicals, including benzene. Benzene is a known human carcinogen and has been linked to a host of other human health effects, including dizziness, headaches, tremors, rapid heartbeat, confusion, bone marrow changes and low birth weights.

The ACS requires authors who submit work for publication to inform editors – and readers – of funding sources and potential conflicts of interest. In addition to acknowledging they used data provided by BP, ChemRisk authors acknowledge,

“This work was carried out and funded solely by ChemRisk. More recently than April 2010, ChemRisk has provided consulting services to Cameron International Corporation on matters unrelated to the Deepwater Horizon oil spill. To our knowledge, ChemRisk has not provided consulting services to any other companies involved in the Deepwater Horizon oil spill during this time period.”

But the journal’s guidelines also require all authors to declare “any employment or other relationship (within the past three years) with entities that have a financial or other interest in the results of the manuscript (to include paid consulting, expert testimony, honoraria, and membership of advisory boards or committees of the entity).”

A spokesman for the ACS says the guidelines have been “consistent over time in obligating authors to disclose financial relationships,” and further confirmed the “obligation applied to the study in question.”

ChemRisk authors did not reveal any such relationships during the three years prior to the publication of the cleanup worker study, which includes the time period between July 2008 and July 2011.

But during that time period, scientist and author Sherilyn Gross, who joined ChemRisk from the University of Colorado in March 2010, authored documents and published research related to the Shanghai Health Study, a $35 million undertaking on the health effects of benzene.  The study was funded by the Benzene Health Consortium and administered by the American Petroleum Institute (API).

BP is a member of the API, a trade association for the oil and gas industry. BP is also a member of the Benzene Health Consortium, which consists of BP and a handful of API members, including Amoco, ChevronTexaco, ExxonMobil, Conoco Philips, and Shell Chemical.

According to documents released last year by the Center for Public Integrity, the purpose of the Shanghai Health Study was to “protect member company interests.”  One “significant issue of concern that the research would affect” was “litigation alleging induction of various forms of leukemias and other hemotopoietic diseases from exposure to petroleum derived benzene” resulting in “millions of dollars in expenses to industry.”

Gross is listed in the API’s 2009 Shanghai Health Study “Communications Package” as one of the study’s Principal Investigators.  Her resume confirms, “Prior to joining Cardno ChemRisk, Dr. Gross was an Assistant Research Professor (at) the University of Colorado Health Sciences Center where she served as the Principle Investigator on behalf of the University of Colorado for the Shanghai Health Study (SHS).”

In July of 2009 – well within the three year window in which the journal requires disclosure – Gross authored a document which she described as a “semi-annual progress report on behalf of the University of Colorado…designed to present the progress made in the Shanghai Health Study over the past six months.”

In the progress report, Gross lists herself as co-author of two manuscripts published in the first half of 2009, co-author of two additional manuscripts submitted but at the time not yet published, and co-author of an abstract “selected for oral presentation at the International Symposium on Benzene Toxicity to be held in Munich, Germany in September, 2009.”

Both of the unpublished manuscripts were later published in the March 19, 2010 edition of the journal Chemico-Biologica Interactions – barely a month before BP’s Deepwater Horizon drilling platform exploded and within the three year time period in question. Both acknowledged receiving funds from the Benzene Health Research Consortium, of which BP is a member.

Furthermore, since publishing the “independent” study on BP cleanup workers in 2011, Gross teamed with ChemRisk scientist and co-author of the cleanup worker study, Dennis Paustenbach to published additional work involving the Shanghai Health Study. Paustenbach and Gross, along with ChemRisk scientist David Galbraith and others are listed as co-authors of “A Case-Control Study of Chronic Myelomonocytic Leukemia (CMML) in Shanghai, China: Evaluation of Risk Factors for CMML, With Special Focus on Benzene,” published in the October 2012 Archives of Environmental and Occupational Health.

In that work, they acknowledge the oil industry as a funding source, specifically stating, “The Benzene Health Consortium was the funding source for the Shanghai Health Study in the form of a research grant. The consortium consisted of petrochemical companies, including British Petroleum Amoco, ChevronTexaco, ExxonMobil, Conoco Philips, and Shell Chemical. The research grant was administered by the American Petroleum Institute.” (I)

Yet still, BP repeatedly refers to the ChemRisk cleanup worker study as “independent.”

In September of 2011, Purple Strategies, a public relations firm contracted by BP, was linked to a press release announcing the ChemRisk BP cleanup worker study. In the release, they referred to the work as an “independent study,” concluding offshore workers had not been exposed to certain harmful chemicals while working cleanup.

In May of 2014, BP twice cited ChemRisk’s “independent” research on a public health fact sheet, again using the study to support their claim that offshore cleanup workers were not exposed to harmful chemicals, including benzene.

In August of 2014, in expert reports prepared for BP and presented with his January 2015 testimony  during Phase III of the BP Trial, Dr. Robert Cox cites the ChemRisk cleanup worker study in an appendix of “materials considered.”  Judge Barbier has yet to rule on the outcome of Phase III, which will determine how much BP pays for Clean Water Act fines for the 2010 disaster.

Ironically, BP’s pubic health fact sheet further states, “We are committed to transparency and we will update these facts if necessary and continue to share information about what we are doing to meet our commitments to the people of the Gulf Coast.”

But as the Gulf Coast solemnly marks five years since the start of the largest maritime oil disaster in world history, residents say BP’s self-professed commitment to transparency and information sharing is nothing more than the hollow words of a corporation trying desperately to shirk its responsibilities.

**In the spirit of full disclosure and transparency, I share that in the process of exposing oil-industry links to the cleanup worker study in question, Cherri Foytlin and I were the target of a defamation lawsuit by ChemRisk.  Recently, the suit was dismissed by a New York judge for having been brought by ChemRisk in the wrong jurisdiction – incidentally a jurisdiction with relatively narrowly defined Anti-SLAPP legislation.  ChemRisk has decided to sue us again, this time in Massachusetts.

(I) A Case-Control Study of Chronic Myelomonocytic Leukemia (CMML) in Shanghai, China: Evaluation of Risk Factors for CMML, With Special Focus on Benzene