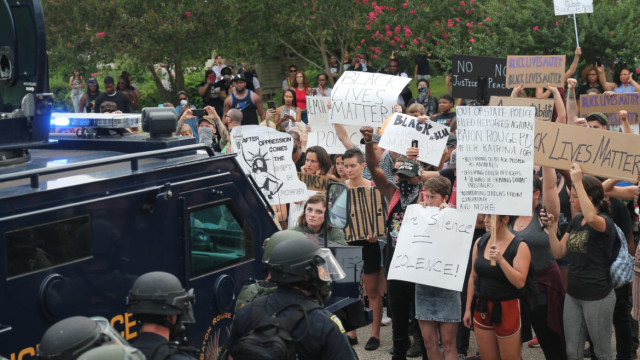 BATON ROUGE, Louisiana — For a few seconds on July 10, the ear-splitting police noisemaker — referred to as an LRAD — and the chants demanding justice for Alton Sterling awkwardly paused at exactly the same moment. I closed my eyes in relief. As if on cue, a lone cicada cried out from the tree above, the insect’s call piercing the air, but not the tension.

With my eyes closed and the cicada’s solo still echoing through the sweltering heat of a Sunday afternoon in Baton Rouge, I saw neat bungalows, crape myrtles and longleaf pine trees. I imagined a crawfish boil, kids on bikes, grandmothers with church hats.

But when I opened my eyes, we were still surrounded on three sides by an army of militarized police.

The protesters were still there, too, many of them young, teenagers or college students. They still had “Black Lives Matter” and “Stop the Killing” emblazoned on their shirts, fists of power and unity still rising into the air. Handmade signs still demanded justice for Alton Sterling, who was still dead.

The early morning July 5th shooting death of Alton Sterling by Baton Rouge police officers is a tragedy that was caught on video by an activist and shared on social media for the world to see. What happened the following Sunday made me wonder what happens in Baton Rouge when the world isn’t watching.

In only a few hours I would go from covering a protest to being handcuffed, transported to the East Baton Rouge Parish Prison and thrown into the general population. I was arrested while trying to cover the story of young people’s reaction to the stark footage of one of their neighbors getting killed by police on video.